Fox Theatre Detroit is a beautiful theatre in downtown Detroit, Michigan. Opened in 1928 as the flagship movie palace for the Fox Theatre Chain, it was designated a National Historic Landmark in 1988 and listed on the National Register of Historic Places in 1985. The Fox has a capacity of 5,048 seats and plays host to many top shows and events. 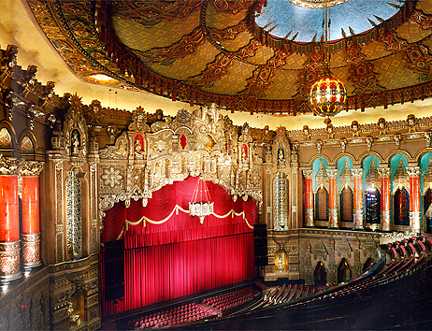 The Detroit Fox was built by film pioneer William Fox and is now the largest surviving movie palace of the 1920s and the largest of the Fox Theatres that were originally built. When The Fox opened it was the second largest theatre in the world and it took 18 months to build. It was the first theatre in the world to be made with built-in equipment for talking movies using “Movietone” which was The Fox Film Corporation’s patented sound-on-film system that allowed the theatre to show sound films from it’s opening onwards.

The gala opening on September 21, 1928 started with a performance of “The Star Spangled Banner” by the Fox Theatre Grand Orchestra, followed by “The Evolution of Transportation” which was a live show depicting the history of Detroit from the 1700’s to 1928. Then to showcase the built-in sound equipment for talking movies Fox Movietone news reel with sound was played, and lastly was the feature length silent film called ’’Street Angel’’ starring Janet Gaynor.

The Fox was designed by architect Charles Howard Crane, a Detroiter who designed 250 theatres in North America, 62 of those in the Detroit area. The theatre has a lavish interior with a blend of eastern motifs. The exterior has a 10-story marquee that overlooks Woodward Avenue. The stunning lobby covers half a block. The Fox was bought in 1987 by Olympia Entertainment, owned by Mike and Marion Ilitch and the building was fully restored to it’s former glory in 1988 at a cost of $12 million. Ray Shepardson who oversaw the restoration stated that “The Detroit Fox is the most spectacular, over-the-top movie palace ever built”.

The interior of the theatre is something to be experience just for its own sake. You enter into the outer foyer through the brass doors and make your way into the colossal grand lobby which covers 3,600 squre feet and rises six stories high. The main auditorium was designed by Eve Leo, the wife of William Fox (the movie mogul who owned hundreds of movie houses in the country of which the Fox Theatre in Detroit was the grandest) and features Egyptian, Indian and Oriental motifs, such as the elephant’s head in the center of the proscenium. The auditorium is 104 ft high and 175 ft wide and has 2,898 orchestra-level seats, with more on the upper level seating area.

As well as serving as Detroit’s premier movie house until the 1980’s, The Fox has a rich history of top class live productions and performances. In the 1930’s Shirley Temple made many appearences when the theatre featured her films. In May 1956 The Fox hosted three performances by Elvis Presley to a total audience of 12,500 screaming fans.

Many Motown artists performed on stage in the 1960’s, and from the early 60’s onwards Berry Gordy’s Motown Revue was an annual Christmas Tradtion lasting over the Christmas to New Year’s period with four or five performances every day featuring Detroit talent such as The Temptations, The Supremes and Smokey Robinson. The theatre showed many blaxploitation and martial arts films during this decade.

At present The Fox, which is also aptly known as the “Temple of Amusement” continues to serves as a premier entertainment venue in Detroit for concerts, comedy acts, musicals and other live productions.

Please note the following when attending the Fox Theatre Detroit: